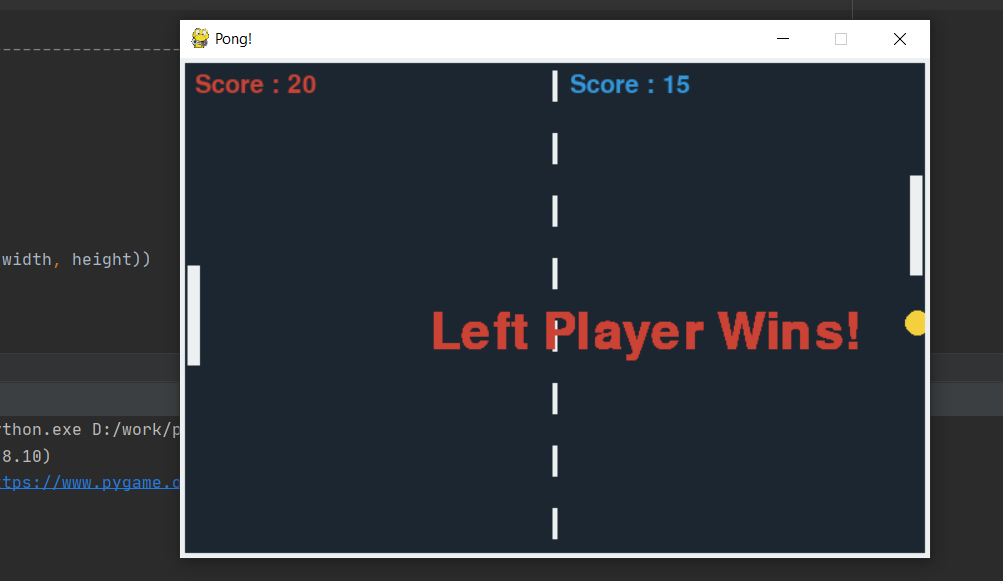 Ping Pong Game project is written in Python. The main objective of this game is to gain the highest score. This game is an interesting addictive fun game. This is a human vs human two-player game and the players have to play from both sides with the help of up and down keys. The game ends whenever the player fails to touch the ball and it touches the other part of the screen. Also, the player has to play the game turn-wise and use some strategy to win the game.  There is a simple and clean GUI for easy gameplay.

The project file contains python scripts (Pong.py). Talking about the gameplay, the user has to strike back the moving ping ball towards the opponent court. If he/she fails to touch the ball, then the opponent player wins that round. And the game will be over after the 20 continuous wins of the same team. The pc control of the game is also very simple. The left-side player has to use W and S keys to move or slide the stick, while the right-side player has to use up and down arrow keys. The gameplay design is so simple that the user won’t find it difficult to use and understand.

To run this project, you must have installed Pycharm (For code execution )and also Anaconda (for the virtual environment) on your PC. After downloading the project, you have to follow the steps below:

Step3: If all the libraries are already installed, run the Pong.py file to start the game.

Step4: If the libraries are not installed, open anaconda then creates a new virtual environment and install the required library in that created environment.

Step5: Now go to Pycharm, click on the file, open settings, open project interpreter, and then select the virtual environment that you have created earlier.

Step 6: Run the Pong.py file to start the game.

Ping Pong Game project with source code is free to download. Use for educational purposes only! For the project demo, have a look at the video below:

Game of Crowns Game In PYTHON With Source Code

Project: Snake Game in Python with source code About Project This simple Snake Game project is written in…

Project: Chess Game in Python with source code About Project Chess Game project is written in Python. The project…

Do you wanna improve your table tennis game
Check out the Stupa App now:

Hello,
the “pygame.py” file is missing when you start the game 🙁
Please help me!